[So, it appears as if the Facebook part of Big Tech is dredging newspapers’ opinion pages, looking for people who criticize the polemic of human-caused CO2-fueled global warming catastrophe.]

This post contains a series of four documents, starting with a 3 May 2019 Letter to the Editor of the Las Cruces Sun-News by CASF member, Fran Lavery, and ends with Facebook censoring my views.

Intermediate steps include a 12 May 2019 Letter to the Editor of the Sun News from Climate Activist Peter Kuntz of Northglenn, Colorado, and my Comment, taking Kuntz to task, and now, recently discovered (June 2021) Facebook actions to prevent my Comment from achieving widespread notice.

The sequence below brings directly to CASF, our members and friends, and other curious individuals, proof that Big Tech, rather than fostering ideas and debate of the issues based on facts and references, is engaged in censorship. In this case, it is Facebook (one wag called it Fascist-Book) censoring views with which it disagrees.

“I have been a Las Cruces taxpayer and resident since 1990. Weather and climate patterns have always been a hobby of mine. I found some of the recent climate presentations at the Rio Grande Theater educational and it was encouraging to see the good turnout. The presenters have been well spoken and knowledgeable. However, all of them have come from one angle of the climate change argument. Why doesn’t the city consider hosting a different point of view in this debate? Even people who believe that the climate argument is settled might be surprised at what they could learn. In fact, here in Las Cruces in our own farming valley, we have scientists, some now retired, from a variety of fields who worked in the sciences, some at the former Army Atmospheric Sciences Laboratory, White Sands Missile Range, who excelled in the complicated issues related to weather and climate. I think it would serve our community very well for the City of Las Cruces to offer this group a forum for presenting its point of view in the same friendly and open environment offered to other speakers in this series.

“These scientists meet regularly at Pepe’s Mexican Restaurant on the third Saturday of each month and have lunch followed by a free topical presentation. The group is Cruces Atmospheric Science Forum. Their website is https://casf.me/ and it provides much useful information to anyone interested in exploring climate science in depth. The free meetings are open to all. I learned about it a couple years ago, and the material presented each month fascinates me. The City of Las Cruces has nothing to lose by considering my suggestion, and the good people of this town have everything to gain.

Letter to the Editor of Las Cruces Sun-News, Peter Kuntz of Northglenn Colorado, published 12 May 2019.

No ‘alternative views’ to climate change.

“’Alternative views on climate change’ (May 3) suggests listening to ‘a different point of view in this debate’ at Pepe’s Mexican Restaurant. Seriously? There’s never been a scientific “debate” about global warming since Arrhenius published his first calculation of global warming from human emissions of CO2 in 1896 (American Institute of Physics). Every scientific body of national of international standing concurs on AGW as do all climate scientists, worldwide, publishing in peer-reviewed journals.

“A phony ‘debate,’ existing only in right-wing US politics, was ginned up by the fossil fuel industry when global warming began to pose a threat to their profits (Scientific American, Union of Concerned Scientists).

“The only real climate debate is whether we can get to net-zero emissions fast enough to prevent “catastrophic” global warming that would cause “global economic collapse” followed by “societal collapse” (National Academy of Sciences). So far, climate disasters have already cost Americans $1.5 trillion (NOAA/NASA). Just a half-degree increase in global temperatures is estimated to cost the US economy $13 trillion and we’re headed for a 5 degree increase (IPCC). That would cost the US over $160 trillion dollars (Forbes, April 2019).

“We will need to cut emissions at least 50% by 2030 to prevent runaway global warming. The Green New Deal is the one plan aiming to make cuts that big. It will cost $5 trillion (NYT April 18, 2019,), but will add $6.5 trillion to the US economy (IPCC), mainly because by 2030 scaled-up solar/wind will be “essentially free” (Financial Times, UBS Aug 2018). Solar/wind are already cheaper than any fossil fuel. (Forbes, Lazard).

my Comment to Kuntz’s Letter, posted on the Sun-News’ Web Site

“Climate Alarmist Pete Kuntz of Northglenn Colorado, whose letter was published in the 12 May 2019 Sun-News is a registered Democrat whose life mission appears to be writing letters to editors all across the country pronouncing consensus science and deriding those of us who actually look at facts, measurements, observations, and data. Kuntz is almost correct about one item, that actual debates are rare because the Alarmists can’t ‘stand the heat’ of measurements and data, and the use of critical thought. It is obvious he has not looked at our web site, https://casf.me/ and availed himself of the numerous subjects there especially this feature, https://casf.me/new-visitors/.

“One item there is ‘Studying Proxy Data;’ graphic 8 shows the very same Vostok Ice Core data mentioned by Al Gore in his science fiction movie, ‘inconvenient truth,’ which shows that today’s temperatures are not nearly as warm as earlier in this current warm period, the Holocene, yet today’s CO2 is ~412 PPM way above any in the previous 400,000 years. Step back to graphic 7 and observe: Present CO2 is 412 PPM, yet this warm period is by far the COOLEST of the five warm periods shown in the Vostok Ice Core plot. If CO2 had much influence, this would not be the coolest warm period, and we would not be cooler than earlier in the Holocene.

“Pete Kuntz shows he is a political activist, not a thoughtful person who actually looks at facts, measurements, observations and data. By his writing, he shows that he was in the slow group in school. Reading comprehension is not one of his strong points, and critical thought is beyond his capabilities.”

“Your comment goes against our Community Standards on spam

“We have these standards to prevent things like false advertising, fraud and security breaches. 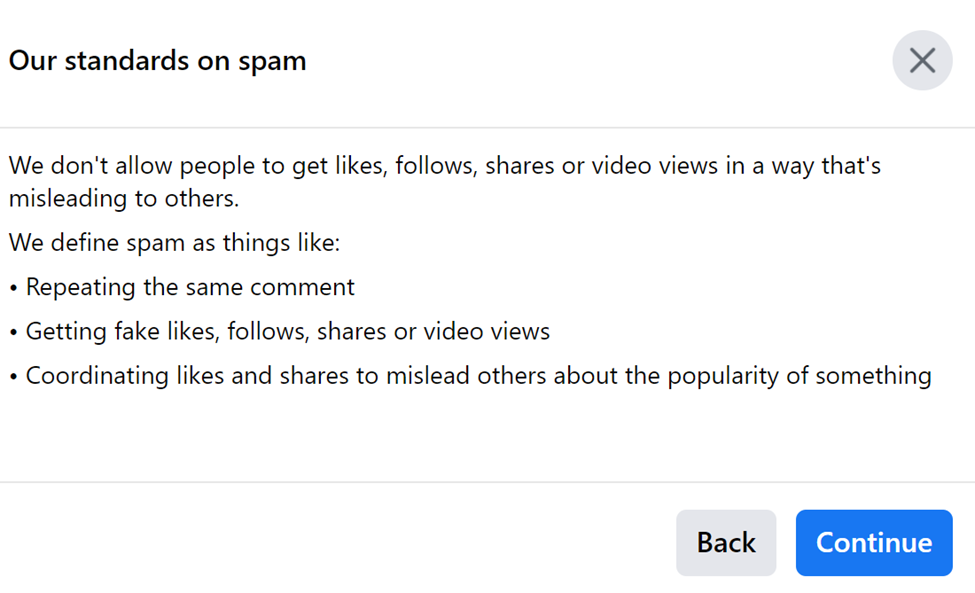 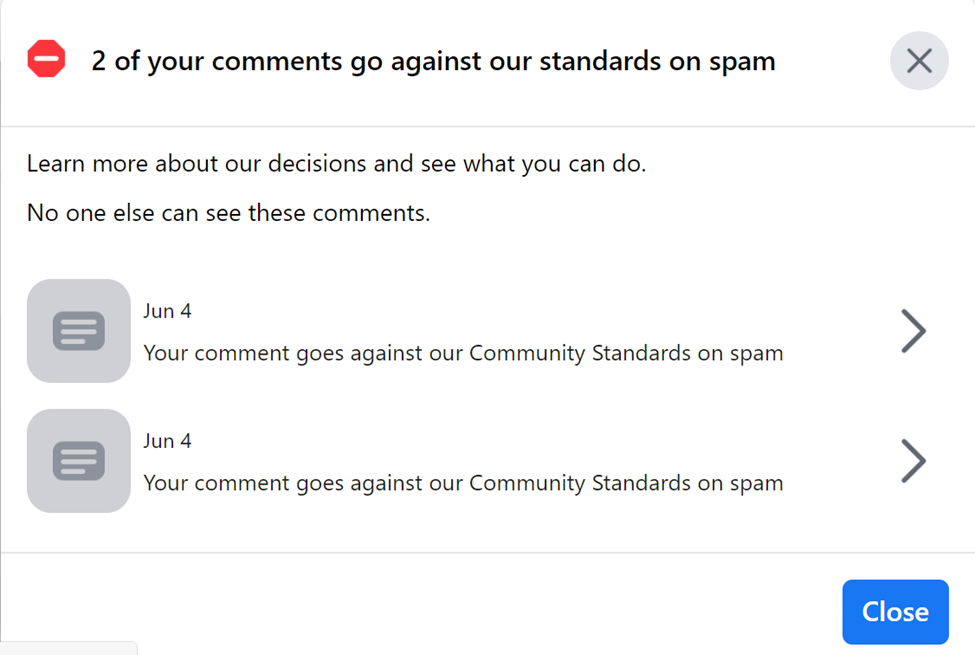 WRAP-UP: WHAT HAVE WE LEARNED FROM THIS?

I never posted my comment criticizing Pete Kuntz of Northglenn Colorado to Facebook, only to the Las Cruces Sun-News Opinion section, 12 May 2019, where Kuntz’s Letter criticizing Fran Lavery appeared. So, it appears as if the Facebook part of Big Tech is dredging newspapers’ opinion pages, looking for people who criticize the polemic of human-caused CO2-fueled global warming catastrophe.  Once we skeptics are identified, the Facebook System throws up the icon which looks like a blend of a Stop sign and a ‘Do Not Enter’ road sign.

This process must use automation and almost no human critical thought.  If you go back and look at the Facebook messages, they claim that my Comment is Spam, but it certainly does not fit Facebook’s own definitions: repeating the same comment, a fake like, follow, share, or video view, or coordinating likes or shares to mislead.

My Comment pointed to a part of the CASF web site’s New Visitors section which contains facts and data about climate history which, if viewed critically, points to the fallacy that CO2 controls temperature and climate.

In Summary, Facebook’s actions are censorship, and ham-handed censorship at that, because it points to components of their “Community Standards” which clearly were not violated by me or my Comment. They just want to punish me by preventing others from reading my views.

Big Tech is imposing censorship on thoughts and ideas it does not like. That censorship extends to us in the Cruces Atmospheric Sciences Forum.