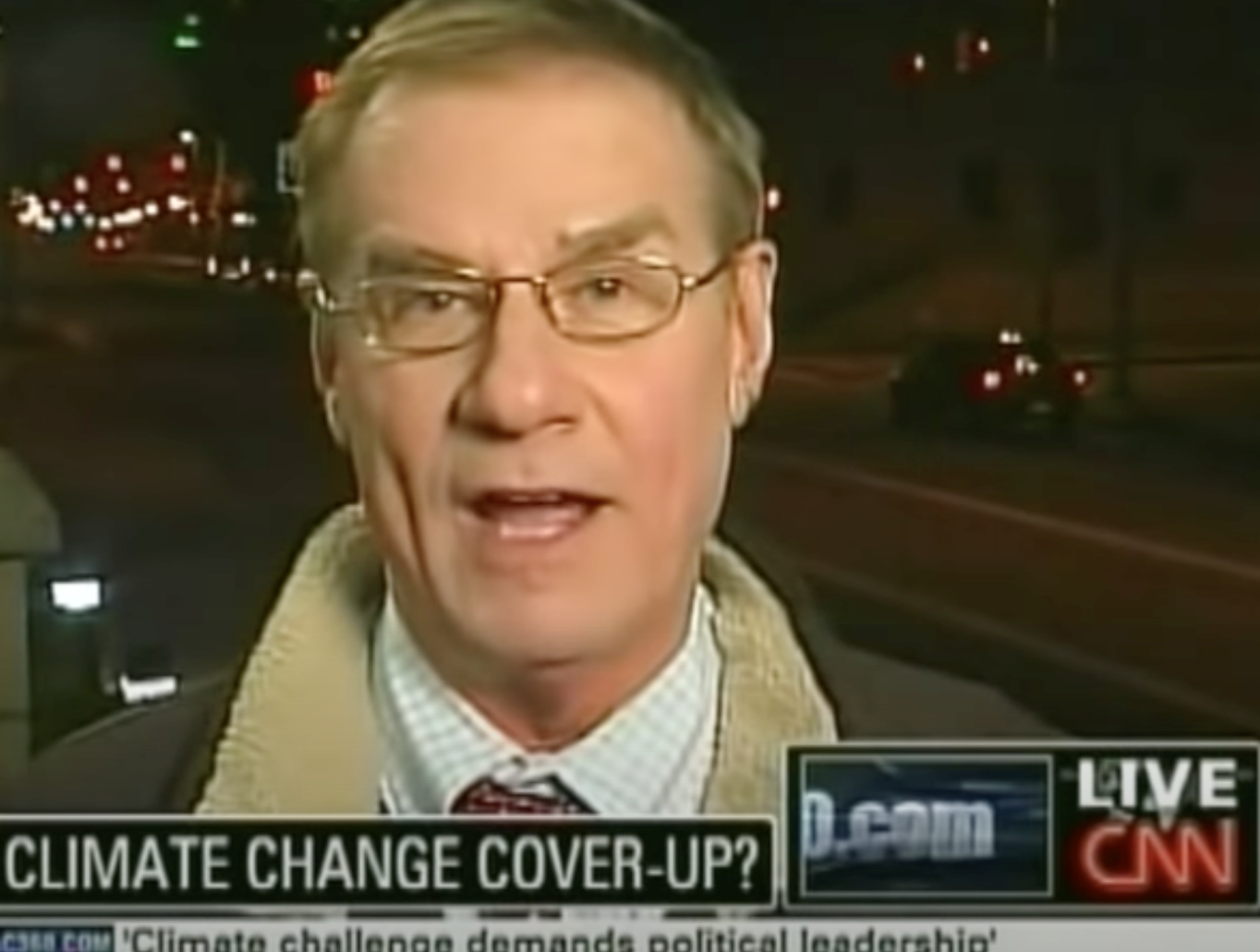 [This post by Jennifer Marohasy originally appeared on her blog site on 20 July 2022.  It is reproduced here under the fair use doctrine.  Ed]

There was a time when it was possible to point out an error by way of a rebuttal published as a note in a scientific journal – even in the journal Nature, even when it went against the catastrophic anthropogenic global warming agenda. The late Patrick Michaels had a note published back in 1996 (vol. 384, pg. 522) explaining that there was a major error in research findings by Ben Santer – findings so significant they underpinned the key claim in the second IPCC report that ‘The balance of evidence suggests a discernible human influence on global climate.’

Pat Michaels’ career spanned the emergence of global warming as the dominant paradigm underpinning not just atmospheric research but more recently energy policy. His death last week represents not only the loss of a great intellect but also the end of an era.

Pat Michaels is a past president of the American Association of State Climatologists, program chair for the Committee on Applied Climatology of the American Meteorological Society, research professor of Environmental Sciences at University of Virginia for 30 years and contributing author and reviewer of the United Nations Intergovernmental Panel on Climate Change (IPCC) reports – reports that more than anything else created the modern illusion of catastrophic warming.

Nowadays a television news bulletin almost always includes climate change – based on the assumption that there is something unusual about the modern climate; that it has been so perturbed by human activity we are heading for catastrophe. There will be some moralising, and an appeal to the authority of science. Some are animated by these reports, some are frightened, but very few can place any of this in any meaningful historical context. If we could, then we would realise that the fear of human-caused climate change is a recent phenomenon. The late Patrick Michaels understood how public choice theory in economics combined with an almost textbook example of how nonsense paradigms can take hold in scientific research created the current faux narrative.

The IPCC was established by the World Meteorological Organisation (WMO) and the United Nations Environmental Programme (UNEP) in 1988 to assess available scientific information on climate change, assess the environmental and socio-economic impacts of climate change, and formulate response strategies. The first IPCC assessment report (AR1) was published in 1990, the second (AR2) in 1995, the third (AR3) in 2001, and the sixth and most recent just last August 2022 (AR6). Each IPCC report consists of reviews of ostensibly scientific work on climate, divided into chapters. Each chapter has several lead authors, plus a number of contributors. In the Second Assessment Report (AR2) it is stated on page 4 that:

The balance of evidence suggests that there is a discernible human influence on global climate.

This was the first unequivocal claim of a human influence on climate being reported by the world’s leading experts and in an authoritative report. That sentence was read and reported by opinion leaders around the world as a breakthrough; such is the reach of the IPCC assessment reports.

The claim was based on the work of Ben Santer, a physicist and atmospheric scientist at the Lawrence Livermore National Laboratory in California, whose job it was to model the effects of human-caused climate change. The nature of his research led to his appointment as the lead author of Chapter 8 of the 1995 report (AR2).

Ben Santer hadn’t actually published the key study on which this claim was based at the time of AR2, in 1995. The research was not published until the next year, 1996. As soon as it was published, it was fact checked by Patrick Michaels who subsequently published the devastating critique in the journal Nature.

Ben Santer’s ‘fingerprinting’ study looked for geographically-limited patterns of observed climate change to compare with patterns as predicted by general circulation models (GCMs). The idea was that by finding a pattern in the observed data that matched the predicted model, a causal connection could be claimed. Except that Patrick Michaels showed that the research on which the key 1995 IPCC ‘discernible influence’ statement is based had used only a portion of the available atmospheric temperature data.

The Santer study was terribly flawed because of the fallacy of incomplete evidence – also known as cherry picking.

Patrick Michaels explained the problem in the chapter he wrote for Climate Change: The Facts 2017. (That chapter has just been made available online courtesy of the IPA, click here.)

The peculiarity of the [Ben Santer] paper was that it covered the period from 1963 to 1987, although the upper-air data required for a three-dimensional analysis was reliably catalogued back to 1957 – by one of the paper’s thirteen authors – Abraham Oort of the Geophysical Fluid Dynamics Laboratory in Princeton. The starting date of 1963 was also a very cool point in global records, as temperatures were chilled by the 1962 eruption of Indonesia’s Mount Agung, one of the four large stratovolcanoes in the twentieth century, and the biggest since Alaska’s Katmai in 1912.

The year 1987 also seemed to be an odd ending point. Data were certainly available through to 1994, seven years later, and updatable through to 1995. It is noteworthy that 1987 was an El Niño year, and therefore relatively warm compared to the rest of the study period.

The match between the observed three-dimensional temperature profile and the modelled profile was persuasive because of the projected difference between warming in the two hemispheres, with a substantial ‘hot spot’ – both simulated and observed – in the lower and mid-tropospheric Southern Hemisphere …

However, the omission of data from the years 1957–62 and 1988–95 was puzzling. The reason these data were not included became clear when I added them in. If all the data were used, there would have been no significant match between the modelled and observed data. Santer et al. simply discarded the data that didn’t fit their preconceived hypothesis.

Pat Michaels showed that when the full data set is used, the previously identified warming trend disappeared. His thoughtful rebuttal, published in a peer-reviewed journal, could have been a game changer. But there was an extraordinary lack of political will to do the right thing that exists to this very day. There is a complete lack of political will to call out the fake findings.

Back in 1996, because of Patrick Michaels scholarly rebuttal in Nature (co-authored with Chip Knappenberger, vol 384, pg. 522), Ben Santer should and could have been hauled before a commission and the entire IPCC process quashed.

Pat Michaels took the time to explore the data underpinning the key finding of the second IPCC assessment report and he showed it to be deficient. His summary of the cherry picking unequivocally showed-up the conclusion to be unjustified because it only included a segment of the available data.

Pat Michaels, the scientist, had loaded the gun with that note published in Nature in 1996. But there was no politician prepared to pull the trigger. Now it is impossible to even get this type of rebuttal published.

If a process of overhauling the IPCC had been put in place back then, back in 1996, there would have been no Third Assessment Report (AR3) and arguably no global-warming hockey stick chart that went onto seal the fate of rational evidence-based discussion about global climate change.

Pat Michaels went on to include public choice theory in his writings. He would emphasise that it does not judge someone’s honesty or dishonesty. It simply implies that the structure of incentives that climate scientists are currently presented with creates a bias of distortion, in which problems must be exaggerated in order to garner funding … and that this political process creates a symbiotic relationship between politicians and scientists that works to both their advantage. Scientists get resources for their research, and responsive politicians can tout their funding of virtuous causes.

On the reality of climate change Pat Michaels explained:

We know, to a very small range of error, the amount of future climate change for the foreseeable future, and it is a modest value to which humans have adapted and will continue to adapt. There is no known, feasible policy that can stop or even slow these changes in a fashion that could be scientifically measured.

Pat Michaels was interested in measurement, and its statistical significance. And he was prepared to be bold and have his inconvenient findings published and then he was prepared to be interviewed about them and explain it all in plain English. There are so few of them anymore at government institutions – as far as I can tell most publicly-funded climatologists are full of hyperbole or cowardice.

The image at the top of this email is Pat Michaels back in 2009 talking about the Climategate emails on CNN, https://www.youtube.com/watch?v=ffgj6Deni_Y

Another Feature for CASF, “New Visitors.”
Is Earth in Energy Deficit?
Updated Analysis Shows Climate Models Continue To Predict Too Much Warming