[Dr Gutzler conducted the 1 March 2018 “Lush and Lean” water conservation workshop in Las Cruces in the Roadrunner Room of the Branigan Library from 5:30 PM – 7:30 PM:  About an hour-long lecture of 21 Slides, followed by questions and answers. The nominal topic was, “Learn about projecting future water supplies in a rapidly changing climate.” I prepared this memo the next day, 2 March 2018 and have edited it a bit in the time since.  I provide it in this post as a small part of the overall climate debate.]

Overall Gutzler did only a fair job explaining the development of the present La Nina and the present and impending drought conditions; I rate it as ‘only fair’ because he did not mention either the 2016 El Nino or features of El Nino-Southern Oscillation, he mentioned the Pacific Decadal Oscillation but did not explain it, or it’s 60-year periodicity.

[This is perhaps professional one-upsmanship on my part, because I think and thought at the time that my presentations on the subject are better than his, an example of my most recent on this subject is at the web site, https://casf.me/wp-content/uploads/2017/10/PDF_Climate-History-and-El-Nino_ENSO-_3_Oct_2017.pdf Slides 34 to 122]

Dr. Gutzler devoted perhaps only 5 minutes to the “increasing greenhouse gasses are causing anthropogenic climate change,” but this point was the last one in the three points he emphasized in his concluding slide.

There were a couple of people who approached Gutzler after the talk was over; I was the last and introduced myself; we have exchanged emails and met briefly in the past and he is well aware of my skepticism of his alarmist views.

The data look nothing like these from the US Climate Reference Network, a 12-year plot: 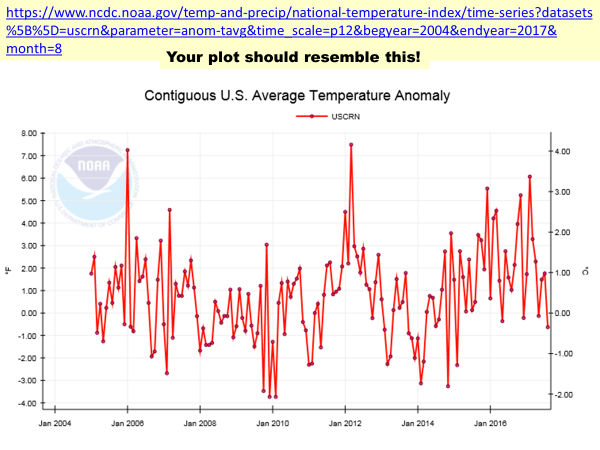 And they do not look like these, either, from the Climate at a Glance site, which show the prominent Dust Bowl maximum a plot from the past ~108 years 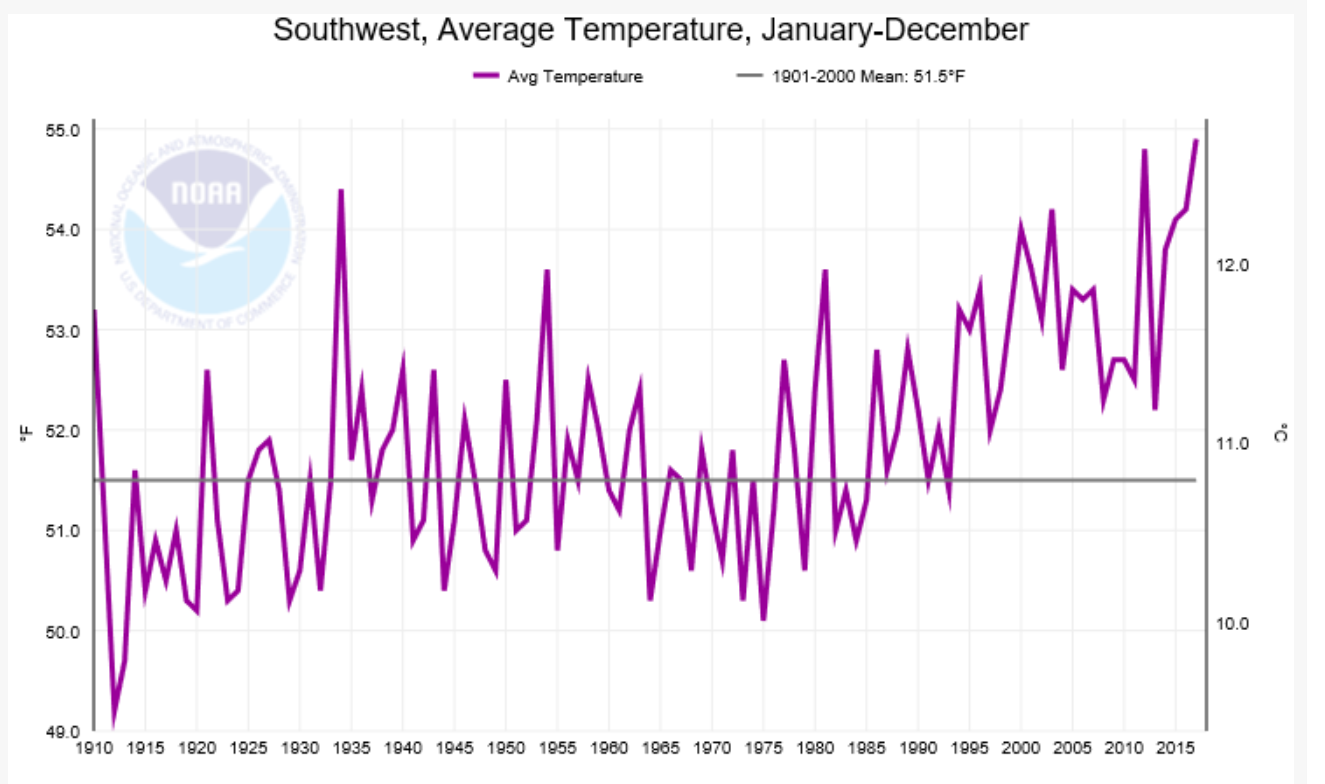 If I recall correctly, his temperature plot showed warming temperatures from the early 1900s to about 1940, steady, perhaps a slight drop 1940s-1970s and dramatic rises since the 1970s.

I told him I would ask for his slides. I requested them from the Lush and Lean coordinator Rhonda Diaz, but she could not provide them.

I told Dr Gutzler that my rural New Mexico data show maximum temperatures in the Dust Bowl 1930s or before and my sourcing of the data, directly from the Western Regional Climate Center, as here: https://casf.me/wp-content/uploads/2017/10/PDF_Examining-the-Hypothesis_with-all-of-the-carbon-dioxide-in-the-air-today_Surface-Temperaturs-are-at-a-high-in-New-Mexico_10_Jul_2017.pdf and that I had downloaded the data into Excel and plotted it. One of those, Columbus, NM, follows from https://wrcc.dri.edu/cgi-bin/cliMAIN.pl?nm2024 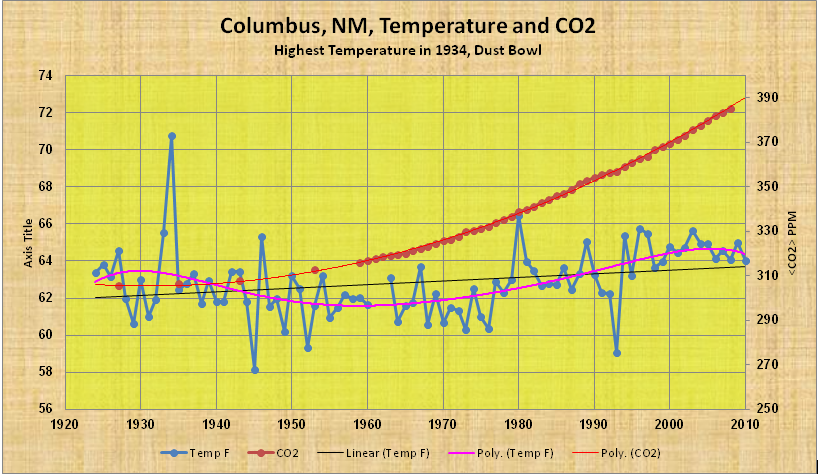 Gutzler said at first that ‘of course he had used the data from WRCC,’ and I asked him exactly which stations he used and how he could be sure of the length of the period of record and whether or not it had rural character, uncompromised by Urban Heat Island. At that point Dr Gutzler said that he had just used state climate divisions which are listed in the Climate at a Glance web site, https://www.ncdc.noaa.gov/cag/ — not individual stations from WRCC.

Now a brief sidebar. Up until that moment in both presentations I had seen him give he was the modest, self-effacing, polite, professional and professorial person. However, all that previous was in the presence of others, many others, but at this time of the evening it was just him and me.

“Professor Nice-guy” disappeared in a flash. He called my claim that there were no credible climate change projections “Bullshit!” I asked him to present me an example of one such credible projection and instead he ranted about his claim that “no serious scientist disagrees with the consensus.” ”You are only one of the isolated lonely people out there who do not understand the truth of the warming,” words to that effect. I was stunned by his emotional manner and the use of appeal to authority of the many, a version of the argumentum ad populum logical fallacy.

I mentioned the Minoan, Roman, and Medieval warm periods warmer than at present with less CO2 than today, and asked, “How could that be?”

Amazing, to me at least, was his claim that the recent rise in temperatures were not natural at all and directly caused by increased <CO2> “there are different causes of climate change don’t you know.” He left me with the impression that he believes in a time-dependent CO2 warming effect.

The change from professorial to emotional surprised me at first, because at a previous meeting, perhaps 2015, when I introduced myself to him, he mentioned that my words and emails were matter-of-fact and lacked the emotion and rancor of other criticisms he had received.

After I thought about this a little, what I thought was a professional approach, “let’s look at the data and examine it carefuly,” suddenly went off into an emotional, bullying response, somewhat between a scolding lecture and a tirade.